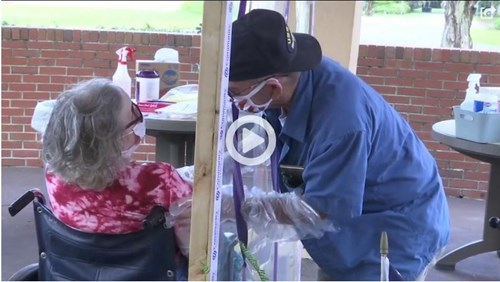 That’s how long William and Ann Hines have been married.

On Friday, the Putnam County couple that was forced to spend their 50th wedding anniversary apart got to embrace for the first time since the start of the COVID-19 pandemic.

Billie Adkins is the Regional Director for North Central Florida for Community Hospice and Palliative Care. She said it’s important for patients and families to see each other and make a connection.

“We can’t stop. We have to be advocates for our seniors. They’re not out of sight out of mind,” Adkins said.

Families can now meet at a “hugging station." Her goal is to make these greetings as safe as possible, especially for those like Mr. and Mrs. Hines.

"Since the virus, they’ve been isolated from one another after being married for 50 years. So to allow them the opportunity just to let them touch each other in a safe way, it’s worth everything,” Hines said.

John Dix was also there to visit his older sister, he hasn’t seen her in months and used to visit frequently. He even brought her a surprise, some of her favorite sugar-free cookies.

This isn’t the first location for the hugging site put on by Community Hospice and Palliative Care, and it won’t be the last.

Volunteers from Trinity United Church helped make the hugging station and so far they’ve made six. Those involved hope the idea continues to help loved ones finally embrace one another after spending so much time apart.